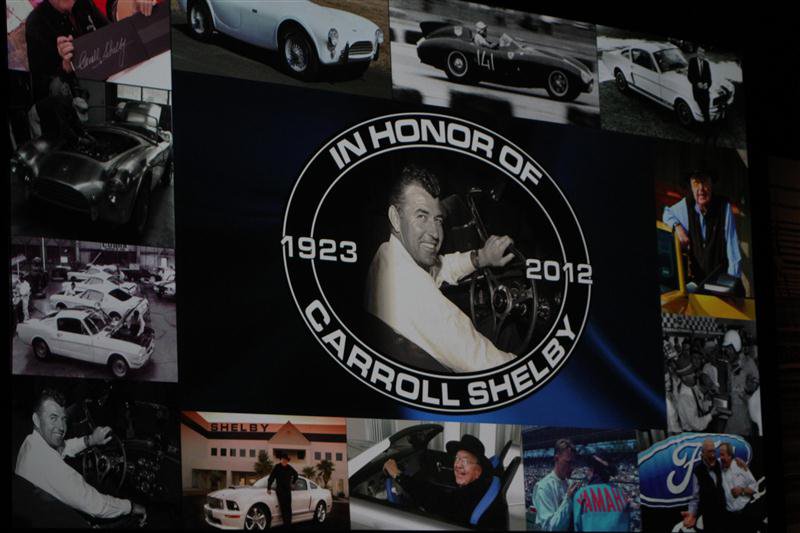 On the 30th of May 2012 A memorial service was held at the Peterson Automotive Museum to commemorate his extraordinary life of Carroll Shelby who had passed away 20 days earlier. The Master of Ceremonies with none other than auto-aficionado and talk show host Jay Leno. The event kicked off with an organized, worldwide showing of respect with revving of Cars engines. On the roof of the Museum hundreds of Shelby cars were parked while the venue hosted thousands of Shelby’s friends and fans. We saw a number of Carroll's closest frinds including Edsel Ford, Bob Hoover, Dan Gurney, Bob Bondurant, Alan Grant and many more. Stories were shared, some happy, some sad – but perhaps none more captivating than that of Bob Hoover who is considered by many to be America's third-most famous aviator, after the Wright brothers and Lindbergh who remembered Shelby as being, by far, the best pilot in his class.

Well a week later came the announcement that the children and estranged wife of sports car designer Carroll Shelby are embroiled in a bitter battle over who gets control of his body, which remains unburied a month after his death. Cleo Shelby the estranged wife of Carroll Shelby is claiming she has the right to decide his funeral because they were still technically married. Sources close to the family claim that Carroll signed a document giving the rights to his remains to his eldest son. We sincerely hope this will all be settled soon and that his family, friends and many admirers throughout the world will have a place to pay their respect . We may never know all of your talents, Carroll, but we will miss you. RIP.