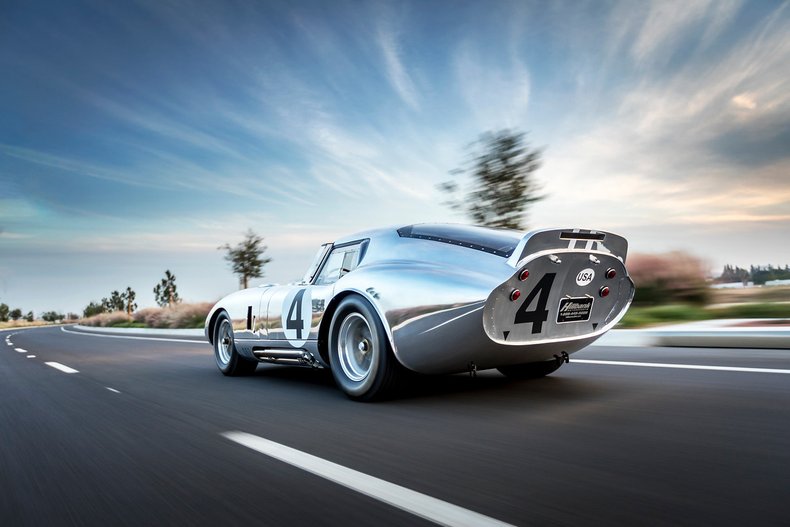 In 1964, Carroll Shelby asked renowned fabricator John Ohlsen to lengthen the chassis of one of the six Daytona Coupes (CSX2286) to replace the 289 c.i.d. Ford engine with a NASCAR inspired big block. The experimental racecar was supposed to be Shelby’s “secret weapon” for the 1964 Le Mans race.

One of the development drivers for the big block car was Bob Bondurant. He stated that the Cobra’s tremendous torque allowed him to burn rubber and get sideways in any gear. He noted that the Shelby “went like stink” and speculated that it could have topped 200 miles per hour at Le Mans. Weighing about 2,200 pounds with world class aerodynamics and the power of a big block, the car had tremendous performance potential.

However, destiny intervened. The truck carrying CSX2286 to Le Mans was involved in an accident that damaged the Shelby too much to be repaired in time for the race. It never ran a lap in anger with the 427 and was returned to small block configuration by Shelby American. Dan Gurney and Allen Grant drove CSX2286 at Le Mans with the 289 engine the next year, but the Cobra did not finish the race.

The continuation big block Daytona Coupes follow the same specs as the Ohlsen modified race car. All Daytona Coupes will feature an aluminum body that can be painted in any race livery. Each continuation Coupe will feature a 3-inch lengthened chassis and hood to accept a powerful aluminum 427 medium-riser big block motor, which will be supplied by the Shelby Engine Company. The powerful 550+ horsepower engine will be mated to a period-correct 4-speed manual transmission. Each will be assigned a Shelby CSX2000 (CSX2620-CSX2625) series serial number for documentation in the official Shelby Registry.