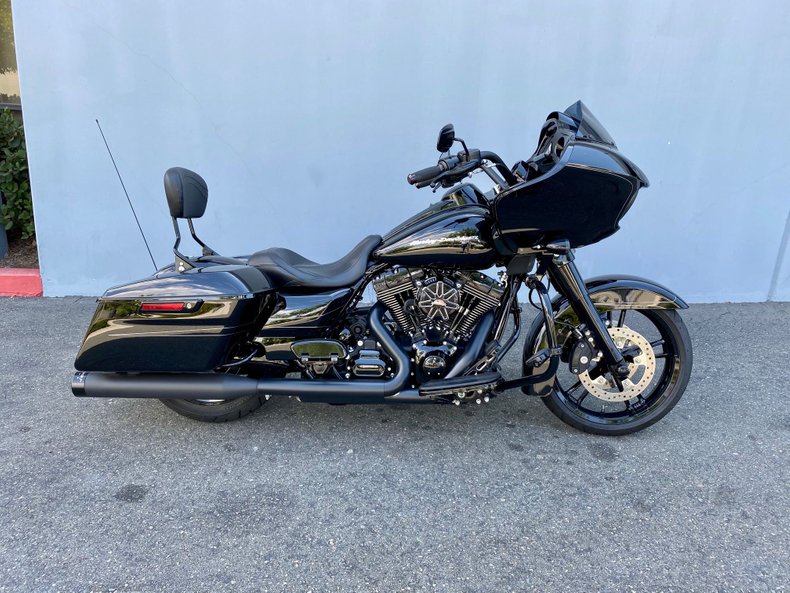 For 2015, Harley reintroduced the Road Glide to the market. The bagger with the frame-mounted fairing got a facelift for the new 2015 Road Glide and Road Glide Special.

One quick look is all it takes to see that this new Harley is dramatically different. It's most apparent in the aggressive new “shark-nose” fairing. Shaped by what Harley calls “countless hours” in the wind tunnel, the fairing of the new 2015 Road Glide is 1.4 inches narrower than the previous design, and it's new “triple splitstream vent” is said to improve airflow while reducing buffeting. Also, Harley's “Dual Reflector Daymaker LED” headlights. According to Harley's product research, better lighting was very high on the wish list of previous Road Glide owners, and the Daymakers deliver. Other Project Rushmore improvements on the 2015 Road Glide models include hard injection-molded saddlebags, the same convenient one-touch-open units found on Harley's other touring models. The standard Road Glide, is fitted with cruise control, Harley's BoomBox 6.5GT system, which has touch-screen controls and GPS navigation. The 2015 Road Glide Special also gets Harley's Reflex Linked Brakes with ABS as standard equipment, together with a painted inner fairing.

As expected, 2015 Road Glides are powered by Harley's High Output Twin Cam 103 engine, the classic air-cooled V-twin that mounts in the same steel touring frame in use since 2009.

This Harley also has $8,000 in black out options and custom trim. Giving this Harley a very aggressive look. The aesthetic paired with the usability of a Road Glide makes this a perfect Harley in pictures and on the road. With just over 300 miles you're getting a brand new Harley for pre-owned price.